Have you heard of The Fifth Season? The Fifth Season was nominated for the Nebula Award and World Fantasy Award for Best Novel. It's being adapted for television. It helped launch a flourishing Patreon page. It won the Hugo Award. The sequel, The Obelisk Gate, won the Hugo the following year.

All of this can be considered so much gilding, in whose heart has just been planted a lily: N.K. Jemisin's The Fifth Season has won The Sputnik Award!

The Sputnik Award was a somewhat experimental prize set up last year, at a moment when the nature and purpose of literary prizes were being subjected to fairly intense and fruitful discussion within SFF fandom. In December 2016, the Sputnik votes were tallied, and two finalists were announced: Jemisin's Fifth Season, and Naomi Novik's Uprooted. The showdown between these two titles now been dramatized in four little videos: Intro, Timeliness, Numinousness, Form. Jemisin wins a year's subscription to Interzone, and some other bits and pieces. We see you, we salute you, and we thank you.

Time for a bit of reflection. In some ways, the Sputnik Award has accomplished what it set out to do.

1) It dislodged the Hugo Awards as the most prestigious award in SFF.

2) It caused a shockwave which fundamentally altered the ways in which we think about voting, elections, publics, peoples, and democracies.

3) It gave me an excuse to read a lot of fun books, helped to put me in touch with some lovely and brilliant folk, and sparked some fascinating conversations.

There are some things it hasn't really done:

1) It hasn't really produced a viable third way between popular awards and juried awards, although has suggested that such a thing is possible, with the right rules tweaks. (In mechanics terms, the Wandering Monster Ballots were a bit underpowered). Not bad for a prototype, I think.

2) It hasn't integrated into the data ecology of existing awards. One intriguing possibility for an award like the Sputniks is to work symbiotically with other existing awards, to mitigate their downsides. For instance, what about an award whose shortlist is partly filled by all the books that just miss out on the shortlists of major awards within a particular year?

3) It hasn't very fully elaborated the possibility space of a digital platform literary prize, which might in theory take the gamification aspect of the award a lot further, and might create all kinds of interesting and weird spaces and affordances for all kinds of interesting and weird criticism, discussion, fanning, secondary production, and other performances and uses of culture. (The Sputniks could still get a lot Sputnikier than they are, basically).

4) It hasn't become an annual award for socialist speculative fiction. I feel that even in a richly crowded landscape of literary honors, there is the space and the need for such a thing. Or for hopepunk, or solarpunk, or for "SFF with radical democratic themes, promoting social and economic justice, and celebrating not just individual freedom, but also collective freedom" (as I put it in an Interzone editorial). But as of now, life is taking over, so there are no firm plans.

5) One way of framing all this activity is as participatory art, and perhaps even as practice-as-research (or practice-led research, as it's also sometimes known). The established wisdom is that such work requires some kind of critical reflective component to really consolidate its insights, and these thoughts (and some of the other awards paratext) might just be the start of that reflection. To go much further, however, ideally I'd like to widen the scope of the enquiry, and ideally to collaborate. Are you an academic researcher interested in literary production and literary awards? Would you like to collaborate on a paper? Even a funding bid? Get in touch!

One principle of the Sputniks was that each iteration would evolve, so we may pop up again in some form in the future. Anyway, we'll leave you with the FAQ, a tangle of laurels ...

... and a scattering of assorted outward links (one or two of them a little quiet at the moment, though all at least well-supplied with rumors & hopes of return):

In December 2016, two books emerged from the Dungeons of Democracy:

Congratulations to both finalists! The winner will be announced later this year. Voters who included their email addresses should by now have all received their personalized chronicles. If you think yours has gone astray, go ahead and query. 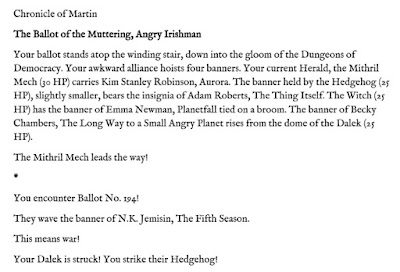 For those who missed the voting window, or didn't leave an email address, and are curious about the output, Martin McGrath has generously shared his chronicle for y'all to peek at.

Many thanks to our specially invited monster-mongers, Nina Allan, Hal Duncan, Tom Pollock, Jonah Sutton-Morse, China Miéville, and Bruce Sterling, and to the voters who also contributed Wandering Monster Ballots.

Voting for the 2015/2016 Sputnik Award for Speculative Fiction has now closed. The winner will be announced before the year is out. 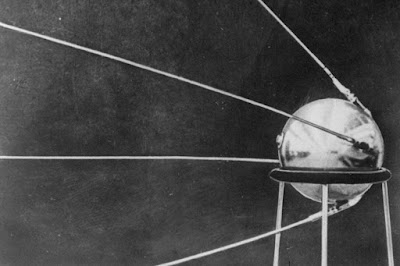